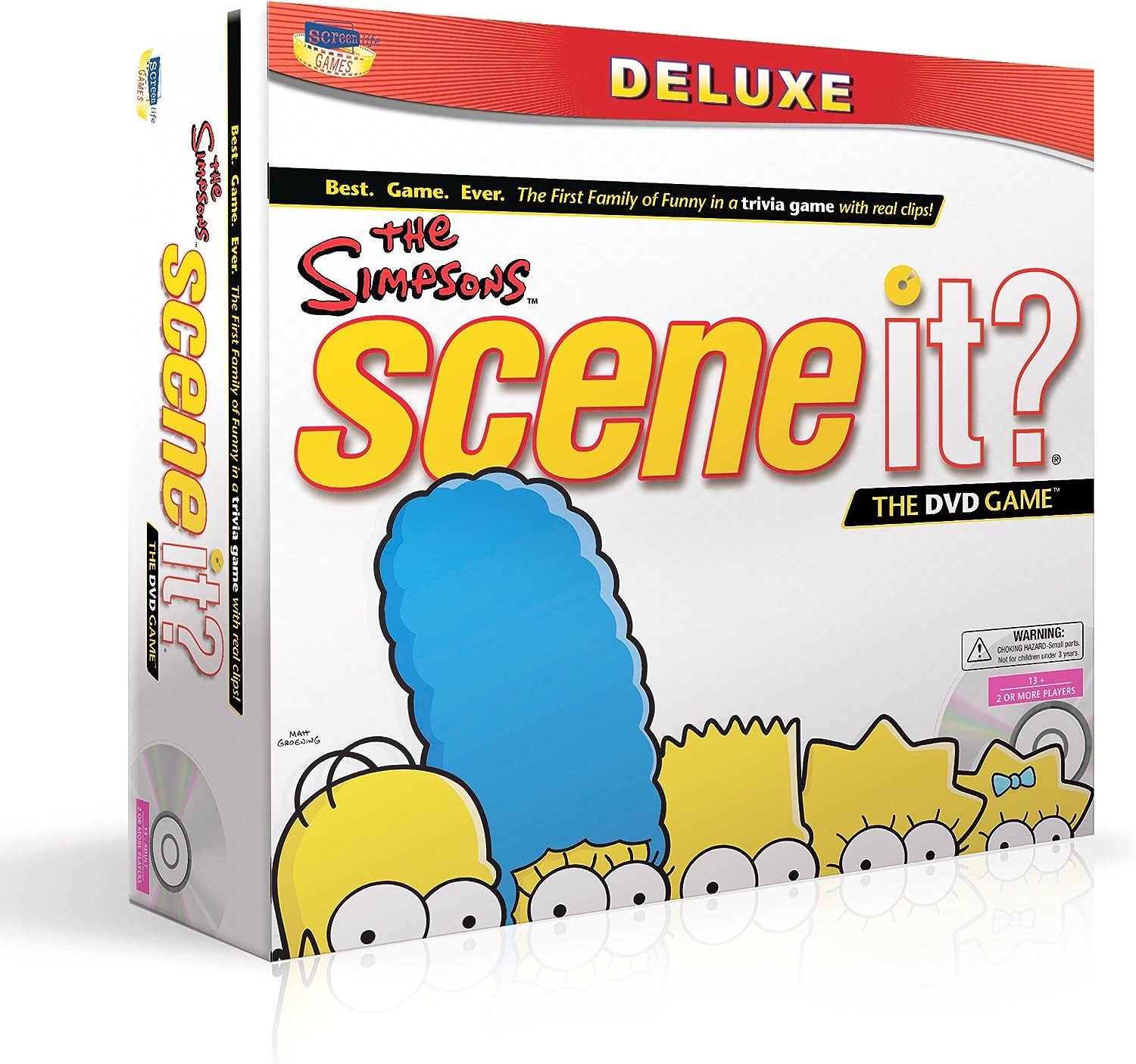 Test your knowledge of Simpsons trivia with The Simpsons Scene It? Deluxe Edition. Recommended for ages 13 and older, this DVD/trivia game celebrates the Simpsons' 20th anniversary, and features material from the show's first 19 seasons. More than just a trivia game, Scene It? also challenges you to use observation, memory, wordplay, and problem-solving to decode special DVD puzzles. Designed for two or more players, this hilarious trivia game is ideal for Simpsons fanatics and casual fans alike.

"br""b"A Trip to Springfield, Trivia Style"br" From the game pieces to the trivia cards, every aspect of Scene It? has been infused with the charm and humor of The Simpsons. The game begins with players choosing one of four collectible tokens to represent their team. Sculpted out of metal, these tokens have been modeled after some of the show's most recognizable icons: the family TV, the Springfield power plant, the three-eyed fish, and a slushie cup. The game board is collapsible and features two sizes, giving you the option of playing a 15-minute quick game or a 40-minute extended game.

Teams advance around the board by answering two types of questions: traditional trivia cards and DVD-based puzzles. The trivia cards, which resemble what you might find in Trivial Pursuit, come in three different categories: green "general" questions, orange "song/dialogue" questions, and yellow "pop culture" questions. They vary in difficulty, and some of the tougher questions are challenging enough to stump even the most fervent Simpsons fans.

The main attraction, however, is the interactive DVD. Featuring hundreds of video clips, sound bites, and images from the show, the DVD challenges players to solve brain-teasing Simpsons puzzles. With a variety of different puzzle categories, the DVD puts your knowledge of The Simpsons to the test. Categories include "Krusty's Cartoon Cut 'Em Ups," where players must identify a character based on a distorted image, and "Blank-Diddly Blank," which challenges players to decode clever wordplay.

Fun for Every Level of Simpsons Fan
The DVD has been designed with the fans in mind. Released to celebrate the 20th anniversary of The Simpsons, Scene It? is the ultimate homage to TV's most famous dysfunctional family. You'll see cameos by your favorite characters, watch video clips from classic episodes, and be treated to the Simpsons soundtrack.

With hundreds of questions, Simpsons Scene It? has something for every type of Simpsons fan. The game is difficult enough to pose a challenge to Simpsons die-hards, but casual fans don't need to worry about being excluded. So long as you can identify recurring characters like Sideshow Bob and Ned Flanders, you will be able to answer some of the easier questions.

The First Family of Funny in a trivia game with real clips! Celebrating the 20th anniversary of TVâs longest-running comedy, Scene It? The Simpsons Edition is loaded with clips, on-screen puzzlers and trivia from all 20 seasons of the show! Test your knowledge of Homer, Marge, Bart, Lisa, Maggie and the rest of the citizens of Springfield. Scene It? is more than Simpsons trivia. Use memory, observation, and word-play to solve different challenges about what you see on-screen. Answer questions, race around the board, and be the first to make it to the Final Cut round. So make a mad dash to the living room couch, pop the disc into your DVD player and get ready to play the Best. Game. Ever.

Elizabeth and The Catapult

Covers I JUST DON'T KNOW WHAT TO DO WITH MYSELF and other classics.

Surprise duets EP ...but i'd rather be with you, too with Molly Madison, Iron & Wine and Nathaniel Rateliff

Sings your favorites, BY REQUEST.

Elizabeth and the Catapult

I Just Don't Know What To Do With Myself

Sign up to our member program for exclusive releases, pricing and more